Share a memory
Obituary & Services
Tribute Wall
Read more about the life story of Ruth and share your memory.

Ruth Rebecca Maria Heinsohn, given life by her Creator was born on July 21, 1919, the child of Johann and Augusta (Weiss) Heinsohn. On August 14, 1919 she received the gift of Holy Baptism and became a child of God. On March 25, 1934, she confessed her faith and was confirmed in St. Paul’s Lutheran Church, Langenburg. She received the gracious gift of the Lord’s life-giving body and blood.

Ruth was joined together in Holy Matrimony to (Carl) Walter Busch. Walter and Ruth were married on August 16, 1941 in Beresina Lutheran Church, Beresina, Saskatchewan. They lived in the Beresina area, on the farm until 1948, when they moved into Langenburg.

Ruth and Walter were blessed with the gift of three children: Janice Ruth Elizabeth, Carole Yvonne, and Walter James.

On the morning of November 14, 2022, God blessed Ruth a holy death and took her home to rest in the arms of Jesus to await the resurrection of the dead.

Ruth is survived by her three children, Janice (Busch) Veal, Carole Busch and Walter Busch, as well as her three grandchildren: Susanne (Trevor) Nicolay, David (Gina) Veal and Trina (Corey) Popowich. Ruth was blessed with six great-grandchildren: Jake and Carl Nasewich, Lucas and Laila Veal and Alex and Chloe Popowich. Ruth is also survived by her sister, Charlotte (Lottie) Stech, as well as by numerous nieces, nephews and extended family.

Ruth was a homemaker he entire life. She will be remembered for her caring nature; she was caregiver to many including her parents, her parents-in-law, her sister Betty and her husband, Walter in later years – a testament to her always wishing she could have become a nurse.

Ruth had phenomenal skills in sewing, crocheting and knitting – she often completed intricate projects without any pattern! Ruth was a terrific cook and baked amazing, yummy treats, including kűchen, strudel, delicious buns, chiffon and angel food cakes from scratch, to name a few. Granny also always baked favorite treats for her precious grandchildren on their birthdays; from donuts to chocolate chip cookies and jam jams. Ruth had many skills in the kitchen and was an expert canner; she did share her family secrets for making sauerkraut and cabbage rolls – without any recipes, of course.

Ruth’s family is full of immense gratitude for the gift of Ruth as a mother, grandmother, great-grandmother, aunt and sister, for 103 years. Ruth, mom, granny will lovingly be remembered for her kind, caring nature; her long, full life will be celebrated!

Ruth is and will be missed by all who knew her, for the truly amazing human that she was.

Ruth's family - her children, grandchildren and great-grandchildren, and sister Lottie thanks everyone for their love and support as we remember Ruth and celebrate her long, full life. Your kindness and thoughtfulness during this time is greatly appreciated.
We would especially like to thank Pastor Barry Wood for being available for the family, Braendle-Bruce for their support and of course the staff of Centennial Special Care Home in Langenburg for the care they provided Ruth during her time there. 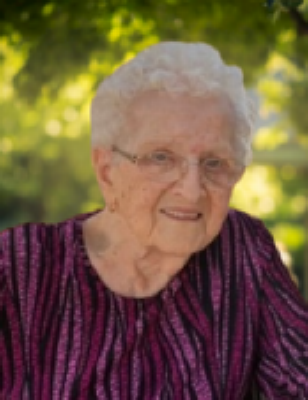